Click on any of the links below to read about our progress and related topics:

NEWS AND EVENTS FROM JUSTIN FOR JUSTICE

The addiction to and misuse of opioids—including prescription pain relievers, heroin, and synthetic opioids such as fentanyl—is a national epidemic that continues to take the lives of tens of thousands of Americans each year. According to the Centers For Disease Control and Prevention (CDC), 130 people die every day in the United States after overdosing […]

Please join us for our Right In Our Backyard: The Drug Addiction Epidemic in Suburbia. We are proudly working with The Girl Scouts of Central New Jersey to spread awareness and open the dialogue regarding the menace of addiction that is becoming more and more widespread in our area. Please join us to support the […]

On Tuesday May 17, 2016, we will be giving a presentation to Girl Scouts of Central and Southern New Jersey from 6.30-8.30pm at the social hall of the Katz JCC. Please join us and share the message.

My son, your friend and relative, Justin Matthew Wolfe would have been turning 25 years old on June 11th of this year.  His life, however, was cut short at the age of 21 from a heroin overdose on December 19, 2012. Over the past two years, I have worked with Jewish Family & Children’s Service […]

Tragedy from Addiction Inspires Local Father to Give Back to Community with Special Event June 11th In the face of the South Jersey heroin and drug addiction epidemic, this benefit, being held in honor of the late Voorhees student Justin Wolfe, will support addiction awareness, support, and education. Gregg Wolfe is the father of Voorhees […]

Standing next to a photograph of a smiling young man, Voorhees resident Gregg Wolfe told Beth El Hebrew High School teens and their parents about his son Justin’s life before he came into the grips of heroin. An excellent student who loved sports, Justin played soccer, ice and roller hockey and practiced karate. The Eastern High School graduate spent four consecutive summers […]

This article first appeared on sjmagazine.net by Jayne Jacova Feld. http://sjmagazine.net/cover-feature/heroin-in-the-suburbs You might think drug addicts only live in Camden – certainly not in Cherry Hill, Marlton or Moorestown. But you’re wrong. Dead wrong. Gregg Wolfe didn’t know his 21-year-old son Justin was using heroin until the morning he died from an overdose in Wolfe’s […]

You might think drug addicts only live in Camden – certainly not in Cherry Hill, Marlton or Moorestown. But you’re wrong. Dead wrong. By Jayne Jacova Feld     Gregg Wolfe didn’t know his 21-year-old son Justin was using heroin until the morning he died from an overdose in Wolfe’s Voorhees home. Like many young […]

Check out this article from CinnaminsonPatch.com. It explains the New Jersey government-launched campaign spreading awareness for addiction in the Garden State, and why they feel the need to advertise to their residents. If you see these around your area, send out a tweet to @GovChristie (Governer Christie), and help spread awareness. 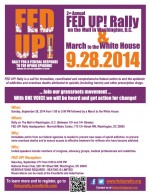 The 2014 Fed Up! Coalition Platform We are in the midst of the worst drug addiction epidemic in United States history. The epidemic of addiction and overdose deaths caused by narcotic painkillers and heroin (the class of drugs known as opioids) is our nation’s most urgent public health problem. Overprescribing of opioids for common conditions is […]

The Substance Abuse Event in Memory of Justin Wolfe’s Birthday was a huge success.  The event which was held on June 11th, 2014 raised $6,075 for Easy Does It, Inc., a non-profit charitable organization dedicated to improving the quality of life of individuals and families recovering from the effects of addiction, thus contributing to the […] 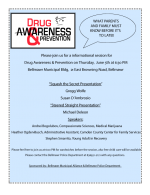 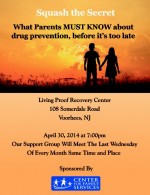 Please click on the button below for access to the full official transcript of a Congressional Hearing on: “Does HIPAA Help Or Hinder Patient Care And Public Safety?” where Gregg Wolfe, and others, testified before the subcommittee.

Drug abuse has always existed on college campuses. But as prescription drugs become harder to obtain, more dangerous substances, like heroin, are on the rise. HuffPost Live goes on campus to speak with students about the drug culture at college.

Click here for more information on this panel discussion.

Gregg Wolfe was interviewed by the Courrier Post in their latest article on this epidemic. Read the

The mission of our group, Squash the Secret, is to Bring Awareness among the parents in our community regarding the hidden dangers of heroin/opiate abuse, knowing the visual as well as the subtle signs, the imminent threat to themselves, their family, friends and our society. Another aspect of our mission is Education in order to […] 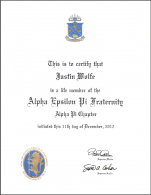 Event honoring the late Justin Wolfe raises over $5,000 for individuals battling addiction. Jun 12, 2013 VOORHEES, NJ- On June 11th, what would have been Justin Wolfe’s 22nd birthday, his family and friends instead celebrated the memory of his life and took action to raise awareness about addiction, the disease that robbed him of his young […]